I’ve been feeling a bit up and down lately. I’m not having mood swings but feeling both positive and negative emotions at the same time. I suppose it’s better than just feeling down, but it’s pretty confusing. There are a few reasons for the way I’m feeling.

First, I’m feeling an immense sense of relief because I’ve decided to freeze my eggs, which my parents have offered to lend me the money for. I’m 33, so if I do it within the next year there is a good chance of success in using them in the future. This means that I don’t have to rush to get better before my timer runs out, which I feel I need to do in order to be in a healthy relationship and to be a good mother. It’s given me back a sense of hope that I will actually meet the right person to start a family with, and I no longer have a time limit to become emotionally healthy, the pressure of which was definitely hindering me in achieving such.

Second, since starting work a couple of months ago, I have an improved sense of self-worth and a little more financial freedom. I’ve paid off my debts and have even started saving money. It’s a very good feeling. I still feel panicky in the mornings when I get to work, but that is starting to go away more and more quickly each day. I was even reprimanded at work and took it in my stride; I recognised that I had done something wrong and accepted the negative feelings my boss had toward me over the incident. I think this is a sign that I am maturing, as normally I would make a bunch of excuses and come home and cry about it.

Third, and this is where the confusing feelings come in, The Onliner and I have become friendly again. I want it to be meaningful, I want to know it will lead somewhere, but I don’t want to put pressure on it or him or get ahead of myself; it may or may not go anywhere and I’m trying to accept this so that I’m not crushed again if it doesn’t. I’m trying to keep a level head, but the interaction makes me happy and I’m confused about whether it’s okay to feel this way. I’d like to allow myself a little happiness, but I don’t want to rely on it for my well-being.

When I start to feel a bit anxious about him or that I’m not getting as much attention as I like, I’m still working very hard on accepting those feelings and countering them with logical thoughts. I’m careful to not avoid the negative emotions or to try to distract myself from them, in order to increase my distress tolerance. I feel like I am getting stronger.

I think I will get there this time. 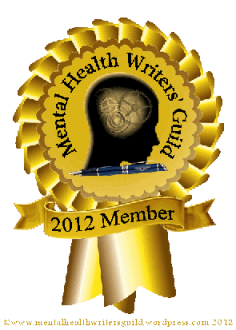 From Borderline to Better is proud to be a member of the Mental Health Writers’ Guild.

Further information concerning the Guild can be found here.

My life has been a shambles for as long as I can remember.

I recently discovered that I have borderline personality disorder.

This is my 90 day challenge to recover.

20-Something Angst and Travels Through India.

My Travels with Depression

A journey through therapy

FOR WOMEN WHO WANT TO CELEBRATE THE GOOD THINGS…

Prego and the Loon

Pregnant and Dealing With Domestic Violence

"Drawing is not an exercise of particular dexterity, but above all a means of expressing intimate feelings and moods." (Henri Matisse)

Not your ordinary self help.

Enjoy Life For Once!

Ideas to Enhance Your Experience of Living, Loving, and Relationships

The Hand of Truth

REAL Advice for the REAL World

Ramblings from a crazy, cluttered mind...

Finding my full potential
Did You Know?
Through Cracked Glasses

My journey through the world of borderline personality and bipolar disorders

One Woman's Story of Recovery From Sex and Love Addiction

Where the gone things go

Living with PTSD and other assorted visitors